What is wrong with me??  I was at the Yankees game yesterday, surrounded by big, burly, beer-swilling, rowdy fans and I found myself thinking about school.  I just couldn't help it - I was inspired by the "Bleacher Creatures" in Section 203.  (This is the view from our seats.) 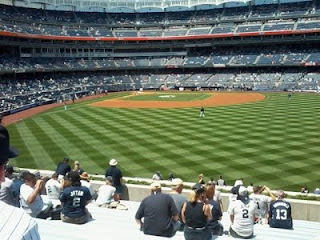 If you're unfamiliar with this famous (or perhaps infamous) crowd of uber-fans, they are a group known for their strict allegiance to the team and their merciless attitude to opposing fans.  One really cool thing they do is called the "Roll Call."   Led by "Bald Vinny," who rallies the rest of the creatures to their feet and into a pinstriped frenzy, the fans start chanting each player's name until the player acknowledges them.  For example, we all roared "De-rek Je-ter, De-rek Je-ter" until he raised his glove.  Other players gave us a salute, a tip of the hat - one even did a King Kong pose. It was awesome!!  Not only did it send a show of support to the players but it also returned a message of welcome to the fans. There was a such an electric dynamic between everyone there - players, fans, even stadium attendants - it really made me feel like a part of the team.
That's when it hit me - this is exactly what I want in my classroom - welcome, support, connection, excitement and a feeling of community.  So... now my wheels are turning. How can I add some kind of "roll call" to my morning meeting to give the kids the same feeling that was there at the ballpark - united, excited and ready to play ball.  I'm looking for some advice and suggestions on how to make it work.  I want the kids amped, but not too rowdy.  I'm thinking they can come up with their own salutes, but should they stay the same or be spontaneous each day?  Would you start the roll call or let a student lead it?  So much to consider...  Any thoughts?
The last of my 7 Birthday Freebies (sorry it's late) is in tribute to the Bleacher Creatures and Derek Jeter's 3000th hit - which we missed by one day, BTW.  It's an emergent reader (that I tweeked a little in honor of DJ) and includes three different versions.  Enjoy!

at 6:05 PM
Email ThisBlogThis!Share to TwitterShare to FacebookShare to Pinterest 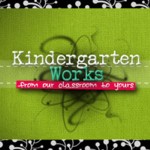